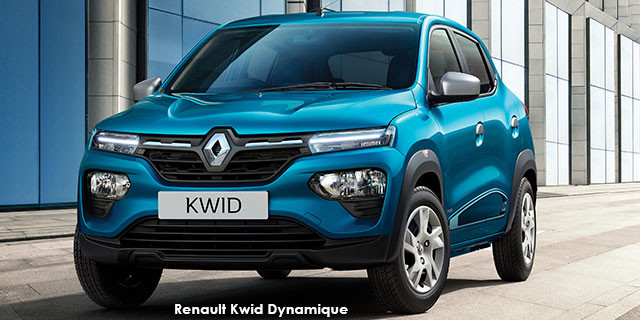 You cannot say ‘Sales revelation’ without making mention of Renault’s diminutive Kwid. With over 20,000 Kwids sold since they hit South Africa just three years, it’s fair to say that the little compact car has certainly put Renault South Africa on the map. But despite selling like hot cakes, the little Kwid is famous for three things - its fantastically low price, its good standard specification, and its lack of safety features.

And now, while it still retains its great price, Renault has finally decided to up the Kwid’s safety specs. While it still soldiers on with just a driver’s airbag, it now gains ABS brakes and a seatbelt warning. But one of the biggest updates is to the cars’ 7-inch infotainment system. The Multimedia system, standard on the Dynamique upwards, comes with a range of functions such as Bluetooth audio streaming and hands-free telephony, USB & AUX-input ports, speed sensing volume control, and has now been upgraded to incorporate smartphone mirroring with Apple Car Play and Android Auto compatibility, allowing consumers the benefit of using either Google Maps or Waze.

A now familiar sight on our roads, the funky Kwid - based on Renault’s CMFA platform – is probably more crossover than mini-hatchback in design. Up front there is a muscular bumper with a blacked out grill – similar to that seen on the Sandero. The wheel arches are cladded in black plastic, further adding to its muscularity. The side section is well toned, contoured and is very much in line with the muscular front. There’s a very short overhang at the rear, but also incorporates black cladding into its lower section, giving the impression of a soft-roader. A ground clearance of 180mm further emphasises this.

In typical Renault fashion, road-holding and ride quality is good. Its suspension setup is a mix of MacPherson struts and a twist beam and coil springs, while braking is handled by discs up front and drums at the back. And despite running on teeny-weeny 155-width 13-inch rubber, overall handling is really decent. Sure cross winds would hamper any vehicle with 180mm of ground clearance, but show the Kwid a twisty strength – and while I wouldn’t encourage it – if you keep well within your limits, the Kwid will make light work of it with thankfully no theatrics. The nicely weighted power steering is equally at home in a mall parking lot as it is on the open road.

As before, the interior is adequately spacious for what is perceived to be a small car. With a wheelbase of just over 2.4 metres, there is satisfactory seating for five adults, with head room being amongst the best in its class. Rear luggage space of 300 litres puts it on par with the Clio and the Sandero – both far bigger cars. This can be extended to 1115 litres by dropping the rear seats. Standard niceties include electric windows, remote central locking, a super effective air-conditioner, and loads of extra storage space.

All Kwids are powered the same 1.0-litre three-cylinder Smart Control efficiency (SCe) engine that produces 50kw and 91nm. All models come standard with a 5-speed manual, bar for the AMT version which uses a 5-speed automatic. Both variants are extremely frugal; with Renault claiming they will sip just 4.7 litres and 4.4 litres per 100kms respectively. Filling up its tank is done without fuss, as it holds only 28 litres. Despite being somewhat peppy off the line, and given a long enough stretch of road, the little Kwid will eventually run out of puff at 152kph.

With revitalised competition in the form of the Suzuki Celerio, Datsun GO and Kia Picanto; thanks to its updates, the revised Kwid aims to put more breathing space between it at the front of the pack. Pricing has been minutely bumped up, but it is still an extremely attractive, and sees the Kwid range priced from R134 900 for the entry-level 1.0 Expression, to R144 900 for the 1.0 Dynamique you see here, to R154 900 for the sporty-attired 1.0 Climber, with the range topped by the 1.0 Dynamique AMT at R154 900. As before, all Kwids come standard with 1-year of Comprehensive Insurance Cover, as well as a 5-year/150 000km mechanical warranty and a 6-year anti-corrosion warranty.

Buy a new or used Renault Kwid at a great price.
We put you back in control, make a single request and get up to 3 quotes from dealers nationally.
Coming soon

The Renault 5 Proto has been revealed, and it will be electric